If one word to describe Shenzhen, That is, youth!

This is the land for strivers, the place where the dream begins!

In only 40 years, from a small fishing village to an international metropolis, from Shekou mode to Qianhai mode, from “catching up with the times” to “leading the times”, Shenzhen has achieved leapfrog development and composed a miracle in the history of world urban development.

The significant changes of 40 years, Shenzhen speed reflect the superiority of Chinese path.

Today, “Silicon Valley of China” and “Smart City” have become the labels of Shenzhen.

There are not only technology giants such as Huawei, Tencent and Dajiang, but also well-known Unicorn enterprises such as Huada manufacturing, Heytea, Codemao and VisionNav Robotics.

It is reported that by July 2019, the total social R&D investment in Shenzhen accounted for over 4% of GDP. There are 14400 state-level high-tech enterprises in the city, and over 60 international patents are granted in average every day. In the volume of more than 1 trillion yuan, the number of new companies in advanced manufacturing industry and high-tech manufacturing industry accounted for 71.9% and 66.6% respectively.

On August 17, Shenzhen government announced that more than 46000 5g base stations had been built in Shenzhen, realizing the full coverage of 5g infrastructure in the whole city, making it the first city in China with 5g independent network coverage, whose 5g base station density ranked first in the world. With the vivid practice of 5g innovation and development in Shenzhen, it will continuously release the potential of intelligent economy, and inject powerful impetus into the construction of “Two Areas”, the Guangdong, Hong Kong and Macao Bay Area and the Shenzhen Pilot Demonstration Area.

This is the technological side of Shenzhen, where innovation never stops!

03 The openness of Shenzhen

“Once you come to Shenzhen, you are Shenzhen citizen”, this sentence is the best portrayal of Shenzhen’s urban spirit.

From entrepreneurs who are not afraid of challenges, city builders who silently remain at their posts, to young people who pursue their dreams, the spirit of Shenzhen makes this city shine:

Don’t cage yourself, don’t be blinkered.

Face difficulties and opportunities, and insist on renewing yourself.

You can change your destiny without believing in fate. 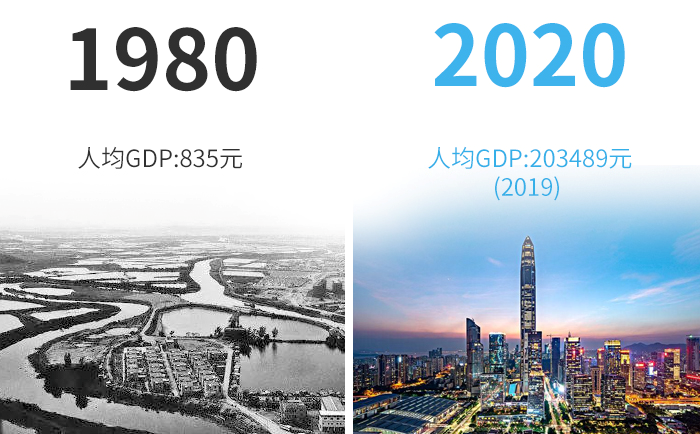 Rooted in Shenzhen for 4 years, VisionNav Robotics deeply implant the “Shenzhen Gene” , namely the speed, technology and openness into all aspects of the company’s development.

In 2016, VisionNav Robotics was established in Shenzhen with only 5 people in the founding team. Four years later, in 2020, the team expanded to nearly 100 people. From 2016 to 2019, the annual sales of VisionNav Robotics has increased from less than 5 million to 30 million, with average annual growth rate of 250%. VisionNav Robotics focus on the R&D and implementation of vision technology. With the continuous integration of servo control, deep learning and 5G communication new technologies, it has brought a variety of world-leading products to smart logistics industry, from the world’s first breakthrough vision guided vehicles with 9.4 meters lifting height, to the BrightEye Environmental Detection System based on deep learning, we have always been committed to the rigid demands of logistics scenarios and breakthrough of key technology. At present, the core technical team accounts for more than 60% of our staff, including senior technical talents with in-depth research and experience in major projects in visual navigation, motion control, and robotic AI algorithms, as well as many returnee doctors from world-class universities, Shenzhen Peacock Program talents, and core R&D team members from top companies such as DJI and Tencent.

In the next ten years, VisionNav Robotics will continue to innovate, co-develop with Shenzhen, and contribute our power to the construction of the Greater Bay Area!

We sincerely thank Shenzhen for its tolerance and support to start-up companies.

Come to Shenzhen! Come to join us at VisionNav Robotics!