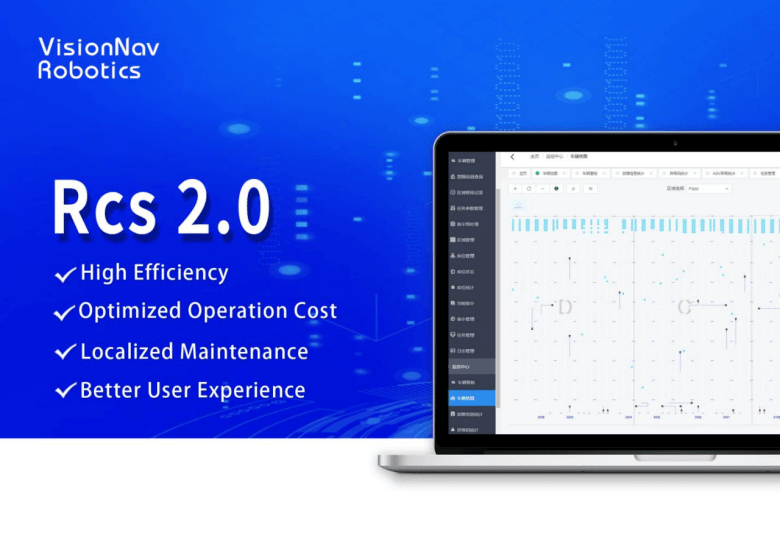 The Robot Control System (RCS) is introduced and self-developed by VisionNav Robotics, a global supplier of autonomous forklifts. The system can be used as a management system that seamlessly connects MES, WMS, ERP, and other customer systems, meanwhile, connects autonomous forklifts equipped with visual navigation modules, thus achieving multi-vehicle and cross-scenario scheduling.

RCS 2.0 version maintains the convenience and practicability of the original one and is leveled up with more functions. In terms of performance, it has stronger scalability, and realizes the compatible scheduling of multiple models in different scenarios, including AGVs, latent jacking robots, four-way shuttle vehicles, and other models; in terms of efficiency, the operation efficiency has doubled without paying more; at the same time, the interface adopts refreshed UI, thus to bring users a better working experience.

Relying on the upgrade of the algorithm, the RCS 2.0 version adopts the whole-situation path calculation and the real-time planning of the single-vehicle path in the large-scale cluster scheduling process of the autonomous forklift. Prevent lockups, traffic jams, and long-holding among vehicles.

The VisionNav RCS 2.0 has been applied to many customer projects. According to the on-site feedback data of some customers' projects in the multi-vehicle mixed-running scenario, the comprehensive operation efficiency increased by 10% during the peak period of business volume.

If there is no avoidable path, the system will perform cascade avoidance processing on vehicles that cannot be avoided, that is, if a vehicle fails, the system will re-plan vehicles b and c that need to pass through point a, of which vehicle b can be avoided. While car c cannot be avoided in the process, the system will continue to make obstacle avoidance planning for cars e, f, and g that need to pass through car point c, and so on. Cascading avoidance can improve the efficiency of avoiding obstacles. The more vehicles there are, the more obvious the efficiency improvement will be.

In addition, the RCS 2.0 version of the operation interface adopts a new VI, the interface display is more concise and intuitive, and it can be understood at a glance, which enhances the user interaction experience.

The language of the RCS 2.0 version has been expanded from supporting Chinese and English bilinguals to supporting Chinese, English, Japanese, Korean, and other multi-language operations. With the country/region where the project is located, the language system can be switched with one click, and at the same time, it supports localized system maintenance to ensure the remote control of the project. Easier to deliver.

VisionNav RCS 2.0 system will continue to be iteratively upgraded. With stronger performance, smarter algorithms, easier use, and openness, it will help customers reduce costs and increase efficiency, and realize the evolution within intralogistics under full scenarios.

VisionNav Robotics Partners with Bartels to Grow the Market in Germany