Imagine an autonomousmous forklift unloads materials from a truck and quickly transports them to the warehouse. The manager sits in the office watching all the logistics data showed on the screen. This is VisionNav's full-stack intralogistics automation solution for enterprises, of which the dock operation is one of the core scenarios. After VisionNav's rendition of unmanned loading and unloading of a flatbed truck in April, the company brought it again but of a wing van truck during this year's KOREA MAT. 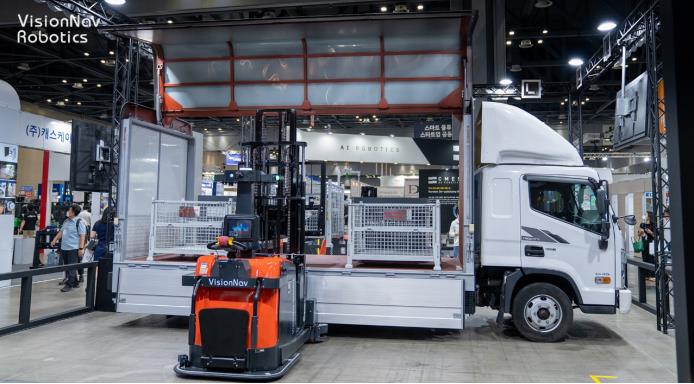 "Wing van trucks are very common in Korea. Material are usually unloaded manually from the truck into a buffer area, and then transferred by autonomous forklifts to an appointed location, such as a lineside area (WIP), or a warehouse," said Vivian, Head of Sales Korea. "And now, by simply introducing VisionNav autonomous forklifts, companies can achieve a closed-loop logistics from dock to warehouse and then out to load again. During KOREA MAT, our unmanned truck loading and unloading demonstrations drew significant attention."

There are 3 key factors that need to be considered for unmanned loading and unloading of a wing truck: 1) outdoor environment; 2) impact of manual operation; and 3) balancing safety and efficiency. VivianNAV uses leading robot positioning, control, sensing and AI deep learning technologies in the industry to launch an unmanned loading and unloading truck solution. The solution consists of 3 parts: VisionNav autonomous forklift, Bright Eyes system and RCS robot control system. After the truck is docked, the Bright Eyes system transmits the information to the RCS by identifying the truck's position and attitude, and calls no VisionNav autonomous forklift. VisionNav forklift is equipped with autonomous path planning, truck identification, cargo identification, and adaptive functions, which can easily sense the outdoor environment, identify cargo conditions, generate loading and unloading models, and complete accurate operations.

"We concern more about efficiency and safety in the real situation. VisionNav's autonomous forklift combines excellent hardware and software and incorporates self-developed algorithms to load and unload trucks with efficiency that rivals artificial ones." VisionNav adopted two forklifts for this demonstration, VNP15 and VNP20, both are efficiency and scenario adaptability. These two products have a safe driving speed of 1.5m/s, can handle loads up to 2T, lift up to 3m, and offer a 4.5m optional mast, which basically covers 70% of material handling scenarios. In addition, P series forklift trucks are equipped with various kinds of clamps, such as clamps for paper roll, rubber, carton, bundles and so on, which can meet the demand of shaped materials handling.

"VisionNav believes that 'driverless technology needs to penetrate deep into scenarios and create value for users', and we have developed 9 series of unmanned forklift products around application scenarios and landed over 350 projects. Meanwhile, with the deep integration of products and industry, it also in turn shapes the capability of our products."